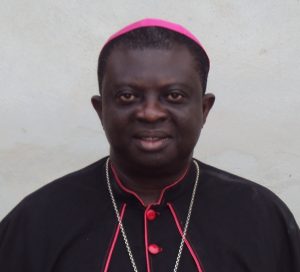 Very Rev. Dr. Hyacinth Oroko Egbebo, MSP was born into the family of Mr. and Mrs. Egbebo Arimanah on October 23rd, 1955. He is the fifth of eight children of the family. Two of his junior sisters have dies. All the children are fruitful members of the Catholic Church. His parent became Catholics in their old age, soon after Bishop Egbebo’s ordination into the priesthood. His mother is late and he has an aged father.

Bishop Hyacinth was born and brought up in Ogriagbene in Western Ijaw of Bomadi Local Government Area of Delta State. He attended Roman Catholic Mission School Ogriagbene (now known as Onurun Primary School). He went on to attend Gbesa Grammar School Ojobo, as one of its pioneer students from 1971-1976. He worked briefly as a primary school teacher in Ediemogbene, Nigeria Ports Authority and later on at Aladja Steel Plant for a cumulative period of six years.

He felt called to the priesthood in 1982 and was admitted to pursue his chosen call at the National Missionary Seminary at Iperu-Remo, Ogun State. He finished his training and was ordained on 23rd June, 1990 as a priest of the Missionary Society of St. Paul of Nigeria.

Soon after his ordination, he was posted to work with the formation team at Initial Formation House in Iperu-Remo, Ogun State. As part of necessary preparation for the work of formation he was sent to Ireland for further studies. Thereafter, he was made the Director of Formation in 1995 as the St. Patrick Fathers, who were initially entrusted with the training of the missionary seminarians. Apart from the period preceding his studies in Ireland, he worked in the Formation house for a total of six years.

In September 2001 he was elected the Superior General of the Missionaries of St. Paul of Nigeria for six years. In September 2007 he was re-elected to serve another six year term. He was also the President of the Major Superiors in 2006.

Just after his re-election as the Superior General of the Missionaries of St. Paul of Nigeria, he was appointed the auxiliary Bishop of Bomadi Vicariate by Pope Benedict XVI.

Fr. Hyacinth has been blessed with good health and he is enthusiastic about his priestly life. He is a simple and available person. This resonates with his personal conviction hence his motto: That they may have life and have it to the full (John 10:10).

The coat of arms is about the triumph of goodness over evil using the event of Christ on the water for its bases.
The insertion of the Missionary Society of St. Paul logo captures my religious affiliation with the missionary institute.
The words of my motto are the exact words of our Lord Jesus Christ in John 10:10 “that they may have life and have it to the full”. it is this same Christ that we are taking after to give life to the flock of God entrusted to our care.